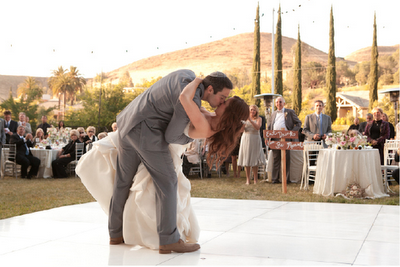 photo: mike segal
Yesterday I officiated the wedding of Alicia and Joel. The ceremony was scheduled to start at 4 PM. By 3:30 the DJ had not arrived. Crunch time. Joel remained calm, though clearly worried. The best man put in a call and the DJ finally called back at 3:45. He said he was running late and that he’d be at the venue in 15 minutes. 4:00 came round and still no DJ. Joel was still calm—Alicia would walk down the aisle to music! The DJ finally showed at 4:30 and the ceremony began at 5:00.

I thought it was remarkable that throughout it all no one panicked. Joel and Alicia were determined that no one and no thing would ruin the joy, excitement, and fun of their great day.
While waiting, guests were served cocktails and had a grand time mingling and meeting-up with old friends and family.

Everyone acknowledged that glitches happen. This was one more thing that would be added to the stories told years from now.

This is what I think is the difference between a “perfect” and a “magical” wedding. Perfection strives to impress. Magic strives to remember what is most important—love, loyalty, family, friends, and the good hearts and wills with which they surround a couple.

Alicia and Joel’s family and friends brought more music with them than any DJ could offer.
No comments: