The Couple I Refused To Marry 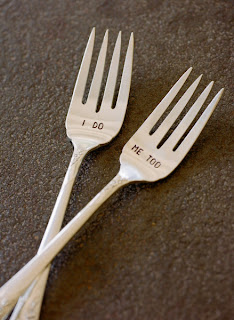 photo: meg smith
Simon and Jacqui were a “nice” couple who happen to be one of a handful of couples whose wedding I declined to officiate.  I actually don’t say “yes” to every couple that asks me to celebrate their ceremony.  While I’m not able to predict if a couple will live happily ever after, I need to have a gut feeling that they have what it takes.

Jacqui and Simon had been together for ten years.  Within minutes of our meeting, Jacqui told me that she had sacrificed her life for Simon.  She gave up plans for grad school so as to work and put him through law school.  She helped him pay off his student loans and she moved around to three different states for him.

She said that now it was her turn—she wanted a wedding and he “owed” her.

Simon had taken the Bar exam and was waiting to hear the results.  Since he’d reached his goal and Jacqui no longer needed to sacrifice for him, I asked him if was prepared to sacrifice for her.  He looked at me blankly.  Huh?  Again, I asked what was he prepared to do to help her reach her dreams.  He was stumped, as he’d never thought of it quite that way.

I’m not a psychologist or a marriage therapist.  I am, though, a communications coach and it was alarmingly evident that Simon & Jacqui had not had the hard conversations that were needed before getting married.

Jacqui presented herself as a martyr for their love.  Generous?  Yes and also drastic as she sacrificed without any planning for her own future.  Simon wasn’t able to tell me what Jacqui’s dreams were because they hadn’t talked about her dreams.

That Jacqui felt entitled to a fancy wedding because she sacrificed for him, puts an odd spin on their wedding.  A wedding is a couple’s celebration and not the bride’s coronation!

Planning a wedding with a tit-for-tat mentality is simply not healthy as it’s petty and rife with opportunities for passive-aggressive acts.

I declined to officiate their wedding because I didn’t understand the vision they had for their life together.  It seemed more a transaction than a sacred commitment (sacred in the sense that when two people give their word to each other, that act is bigger than just the two of them).

So, what is your vision for your great day?  For your life together?  If you don’t have a shared vision, then what do you have?!

I officiated Jindy and Tilmann's wedding last Fall at Pelican Hill. There were many special touches woven into their ceremony, the most moving of which was the ring Jindy gave to Tilmann.  It had been his great-grandfather's wedding ring and was one hundred years old!

I always find the exchange of rings to be something of an electrifying moment in the ceremony and I was especially moved when Jindy placed the ring of Tilmann's finger––it was slipping a hundred years of devotion and love onto his finger! 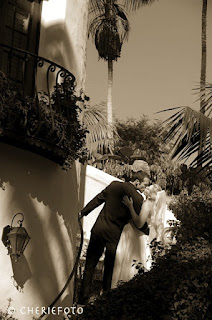 photo: cheriefoto.com
The greatest thing you’ll ever learn is
to love and be loved in return

Answer these questions and you’re well on your way to writing your vows!

What Was Your Favorite Ceremony? 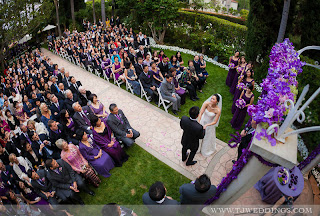 Brad and Darlene, the couple I met with today, told me that they weren’t sure what they wanted, even though they’ve been to over a dozen weddings in the past two years.  They said that they all had become just a blur.

But then Brad excitedly turned to Darlene and reminded her of the wedding of their friends Jared and Kathy.  Darlene in turn got excited and agreed that the ceremony had been beautiful.

However, when I asked what about the ceremony they liked, they drew a blank––they couldn’t remember anything specific!  They just remembered that the celebrant offered words that touched them and that spoke to their own relationship.

As they chatted a bit longer about the wedding, it became clear that they couldn’t remember much of anything––just that it was a wonderful experience.

I laughed because they proved what I’ve always maintained.  People don’t remember details so much as they remember the feel and tone of your celebration.  I’m sure Jared and Kathy put a lot of thought and care into the planning of their ceremony and reception, but what Brad and Darlene remembered was the joy and love that went into the day and not the particulars.

I think this is vitally important to keep in mind as you plan your celebration.

If you can’t recall the particulars, why do you think that is?

Let your answers to these questions guide you in your own planning!

Love In All Its Ebb And Flow 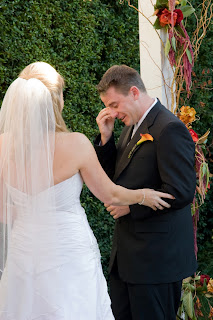 photo: diana henderson
When you love someone, you do not love them all the time, in exactly the same way, from moment to moment.
It is an impossibility.
It is even a lie to pretend to.
And yet this is exactly what most of us demand.
We have so little faith in the ebb and flow
of life, of love, of relationships.
We leap at the flow of the tide and resist in terror it ebb.
We are afraid it will never return.
Anne Morrow Lindbergh

I’m intrigued and challenged by this quote from the wife of legendary pioneer aviator Charles Lindbergh.  Perhaps you are, too. . .

Dealing With A Momzilla! 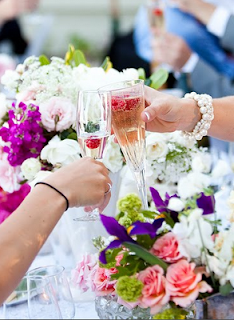 photo: jesse leake
Sandy Malone, a guest blogger onthe Huffington Post Wedding Section, recently wrote about how not to let a “momzilla” ruin your wedding day. It’s a good posting and worth reading, in my opinion.  However, the comments brides left especially fascinated me––many of who suggested that you not fight your mom and let her have her way!

Well, although I’m not a bride, that kind of advice makes me feel queasy.  If you let your mother trample on your vision for your wedding will she be satisfied and let you and your husband (wife) live in peace?  I don’t think so.  I think she eventually will go on to tell you how to cook, keep house, and be a wife (or husband).  And, then, when you have kids, I have no doubt she’ll weigh in on your parenting techniques.

Here are some questions I think you and your partner need to talk about at the outset of your wedding planning.  These are issues you need to consciously talk about and not take for granted.

The more clear you are in your answers, the better you’ll be in containing your mother (or father) in their efforts to hijack your day (and your married life): 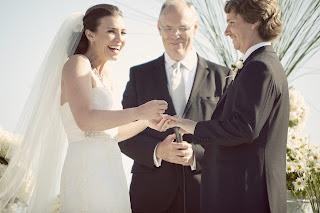 In her book, FOR BETTER, Tara Parker-Pope, blogger for The New York Times Well Section, offers what I think is a critical insight into successful arguing.

She writes that marriage studies show that one of the main differences between a good fight and a bad fight is whether it begins with a complaint or a criticism. For example, "I wish you went with me to see more vendors" (complaint) versus "You never show any interest in planning this wedding. What's wrong with you?" (criticism).

The difference between a complaint and a criticism is often subtle, but the results are dramatic.

Criticizing and attacking your partner will only make them defensive.  In turn, they’ll either shut-down or lash out.

A complaint lets your partner know how you feel as a result of the upsetting or disappointing behavior.

Think back on your last argument––did it begin with one of you criticizing the other?  Were you upset more with what your partner said or with how he or she said it?